“Strung with Love” – The Art of Making and Using your own Prayer Mala, workshop will

be presented at Gypsies, 549 Chetco Ave, Brookings, Oregon on Saturday, February 15th from 5:30pm to 8:30pm. The practice of using and making Mala Beads quiets the mind and realigns the body’s energy. It is also known as “Japa Yoga”. The workshop will be facilitated by Sue Robson, who created PrayerMalas.com in 2010 and has been giving these workshops for the past 8 years. She is a Licensed Prayer Practitioner / Spiritual Counselor with the Centers for Spiritual Living. 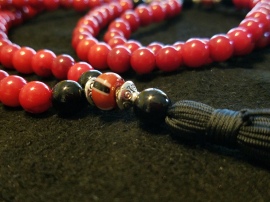 Come together with others to how to make and use your own Prayer Mala. We will go over simple beading techniques including tassel making as well as learn how others use beads for meditation and prayer. We will end the class chanting a mantra while using our newly made Prayer Mala. No prior beading experience is needed; only your desire to be creative.

For a sample of what to expect at the workshop, go to: https://prayermalas.wordpress.com/about/

Cost: $30 per person plus cost of materials which will be available at the workshop. Materials start at $8.

Strung with Love: The Art of Making and Using Prayer Malas is coming to Oakland Center for Spiritual Living on Sunday, July 30th from 1pm to 4pm. In this workshop you will learn the some of the history and background behind prayer malas and how to make your own mala to enhance your spiritual practice. See below for price, location and phone number to reserve your spot. Mala kits will be sold at the workshop. 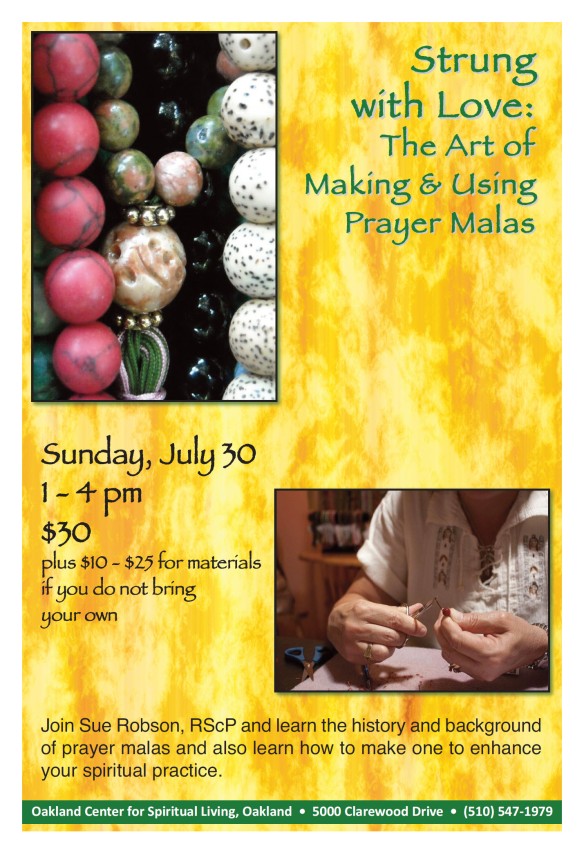 Since 2009, I have been using and making PrayerMalas. I found that in making them, I

was meditating and that energy and love was going into each string of beads. Every bead I chose was a prayer in itself. If I was making a mala for a specific person, I would learn what their intention was and infused it in my work. The outcome was a PrayerMala as unique as the individual for which it was created.

The tassel, on the mala means enlightenment; that as a person uses their mala for chanting and reciting affirmations or prayers, the enlightenment that comes from such a practice is represented by the tassel. I feel that it holds the energy of the individual’s practice. I know that when I grab my favorite, long time used 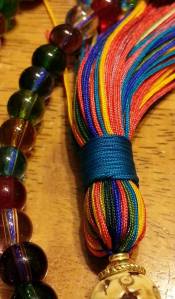 PrayerMala, if feel it calming me even before I begin to chant.  I looked for pre-manufactured tassels to attach to the PrayerMalas I make, but as I began making PrayerMalas, I realized that the tassel needed to be integrated into the mala, not just simply attached at the end. I practiced on at least 2 dozen PrayerMalas before I found a perfect way to make the tassel. It takes a little longer, but it is stronger and flows organically from the string of beads.

I chose to write the word “PrayerMalas” and “PrayerMala” as one word. It was how it called to me. It was my signature to the functional craft I was creating. After I learned about using beads to chant mantra, in the class I took on Spiritual Practices for Daily Living, I felt a weight lift from me. This new practice allowed for movement during this form of meditation. Sometimes the thought of being quite and still in meditation can be scary. So just as writing in a journal can release what is in a person’s mind, chanting mantra on a PrayerMala and the movement from one bead to another can allow the physical energy in the body to release and make space for the mind to open as the meaning of the words permeate the experience.

I chose to move PrayerMalas.com to WordPress because it, just like all of us, are evolving, living and moving beings. The old website, as beautiful as it is, was not easy 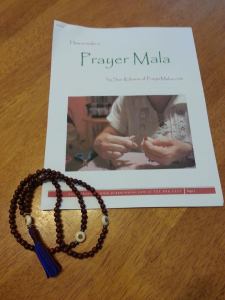 to change and could not engage with other people, sites and blogs. WordPress allows for that social connection.

I am still working out how to display the PrayerMalas that I make and how “The Store” will function. I will be listing when and where my workshops, “Strung with Love, How to make and use your own PrayerMala” will be held.

I look forward to sharing and being a part of this community and reading blogs of other people who enjoy chanting, mediation, beads, prayer and art.